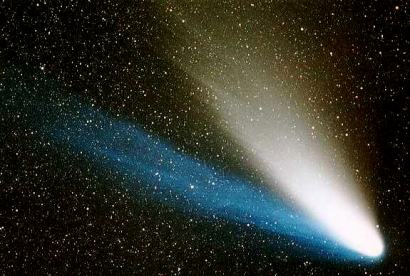 Hale-Bopp was discovered independently by Alan Hale, New Mexico and Thomas Bopp, Arizona on July 23, 1995. Hale-Bopp is an unusually bright comet outside of Jupiter's orbit (7.15 AU!). The new comet, designated C1995 O1, is the farthest comet ever discovered by amateurs and appeared 1000 times brighter than Comet Halley did at the same distance.

Normally, comets are inert when they are beyond the orbit of Jupiter, so it has been speculated that Comet Hale-Bopp is either a rather large comet or experienced a bright outburst (or both). The comet is the brightest comet since Comet West in 1976.

From Hubble Space Telescope images, the comet's diameter has been determined to be about 40 km. The Pic du Midi Observatory has ascertained from their observations that the comet's rotation rate is 11.4 hours.