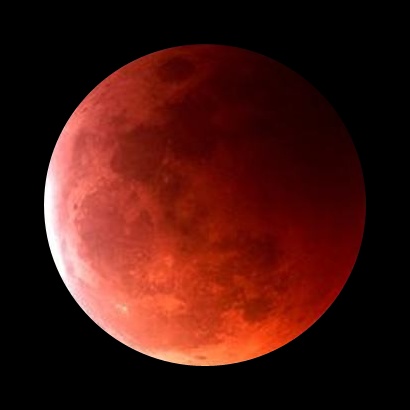 Blood Moon. According to folklore, October's full moon is called the "Blood Moon" or sometimes the "Hunter's Moon." It gets its name from hunters who tracked and killed their prey by autumn moonlight, stockpiling food for the winter ahead.

What makes the eclipsed moon turn red? The answer lies inside Earth's shadow.

Our planet casts a long shadow. It starts on the ground -- Step outside at night. You're in Earth's shadow. Think about it!--and it stretches almost a million miles into space, far enough to reach the moon.

The exact color depends on what's floating around in Earth's atmosphere. Following a volcanic eruption, for instance, dust and ash can turn global sunsets vivid red. The moon would glow vivid red, too. Lots of clouds, on the other hand, extinguish sunsets, leading to darker, dimmer eclipses.