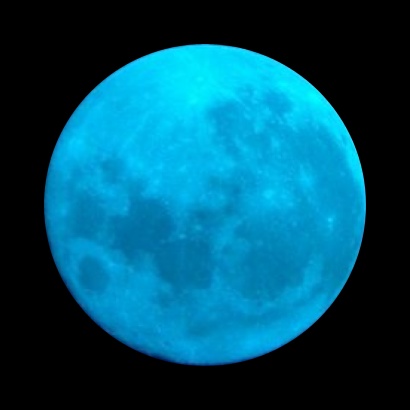 Blue Moon. According to modern folklore, a Blue Moon is the second full moon in a calendar month. Usually months have only one full moon, but occasionally a second one sneaks in. Full moons are separated by 29 days, while most months are 30 or 31 days long; so it is possible to fit two full moons in a single month.

There was a time, not long ago, when people saw blue moons almost every night. Full moons, half moons, crescent moons -- they were all blue, except some nights when they were green. This was in 1883, the year an Indonesian volcano named Krakatoa exploded. Krakatoa's ash was just the right size to strongly scatter red light, while allowing other colors to pass. White moonbeams shining through the clouds emerged blue, and sometimes green.

Blue moons persisted for years after the eruption. People also saw lavender suns and, for the first time, noctilucent clouds. The ash caused "such vivid red sunsets that fire engines were called out in New York, Poughkeepsie, and New Haven," according to volcanologist Scott Rowland at the University of Hawaii.

Other less potent volcanos have turned the moon blue, too. People saw blue moons in 1983 after the eruption of the El Chichon volcano in Mexico. And there are reports of blue moons caused by Mt. St. Helens in 1980 and Mount Pinatubo in 1991.