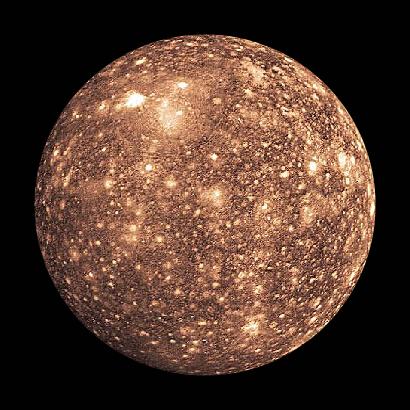 Callisto. Jupiter Moons. Callisto. Jupiter Moons. Callisto, Europa, Io and Ganymede were discovered by Galileo Galilei in 1610 using a telescope. Ganymede, Callisto, and Europa are all suspected of having oceans of liquid water beneath their icy crusts. If true, Ganymede and Callisto can probably thank the natural radioactivity of their rocky interiors for keeping their slushy water from freezing solid.

Callisto, about the size of Mercury, is the third largest moon in the solar system (Saturn's Titan is #2) and is the outermost of the Galilean satellites. It is completely covered in craters, more heavily cratered than any other moon or planet in the solar system. Unlike the other large bodies, which have recoated at least parts of their surfaces, Callisto remains as it was when it formed four billion years ago, during the period of intense meteoroid bombardment that the entire solar system experienced.