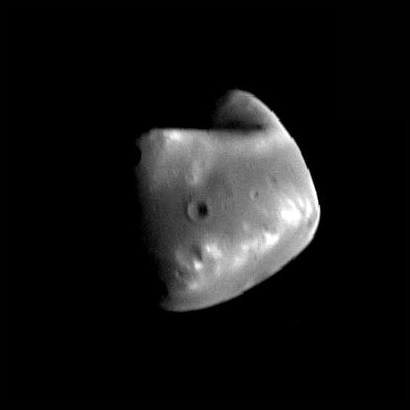 Deimos is heavily cratered and lumpy. Not exactly round. Its craters are generally smaller than 2.5 kilometers in diameter. Typically when a meteorite hits a surface, surface material is thrown up and out of the resulting crater. The material usually falls back to the surface surrounding the crater. However, these "ejecta deposits" are not seen on Deimos, perhaps because the moon's gravity is so low that the ejecta escaped to space. Deimos has a thick regolith, perhaps as deep as 100 meters, formed as meteorites pounded and pulverized the surface.