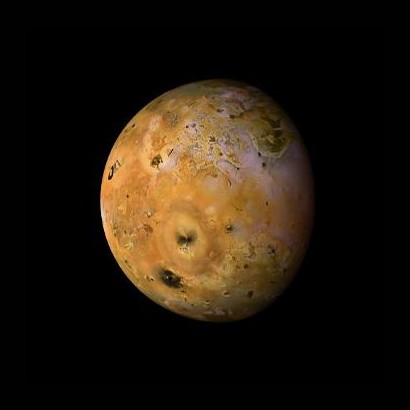 Io. Jupiter Moons. Io, innermost of the Galilean satellites and slightly larger that Earth's moon, goes through even greater gravitational flexing, with "tides" of as much as 100 meters (328 feet) in its solid rock surface. The resulting frictional heat keeps Io's subsurface rock layer molten and pressurized, constantly ready to feed the moon's many volcanoes.

Covered in sulfurous lava that makes it look a little like a giant pizza, Io is the most volcanically active body in the solar system. Voyagers 1 and 2 saw nine eruptions and the Galileo spacecraft has since spotted hundreds of smaller eruptions. Plumes of red and yellow sulfur dust shoot 300 km (186 miles) into the sky. Some escapes Io and paints a bright red coat on a small, neighboring moon called Amalthea.

Io contributes to fireworks on Jupiter, too, giving rise to powerful radio transmissions and contributing to auroras as the rapidly spinning planet sweeps its powerful magnetic field across the natural satellite.