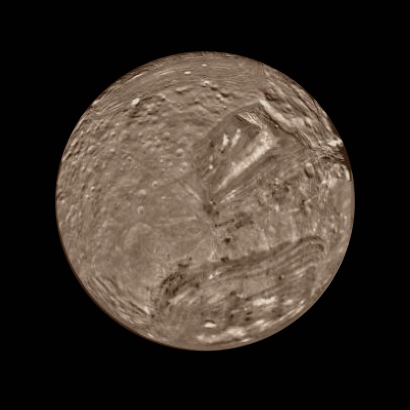 Miranda. Uranus Moons. Oberon and Titania are the largest Uranian moons, and were first to be discovered by William Herschel in 1787. William Lassell, who had been first to see a moon orbiting Neptune, discovered the next two, Ariel and Umbriel. Nearly a century passed before Gerard Kuiper found Miranda in 1948.

Miranda, the innermost and smallest of the five major satellites, has a surface unlike any other moon that's been seen. It has giant fault canyons as much as 12 times as deep as the Grand Canyon, terraced layers, surfaces that appear very old, and others that look much younger.