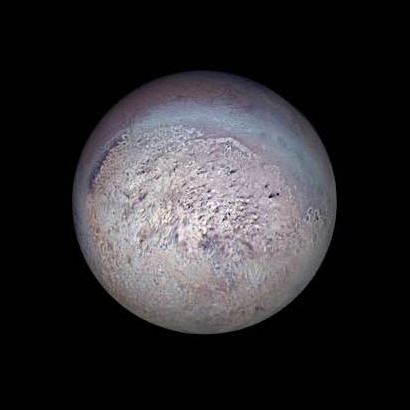 Triton. Neptune Moons. Triton is the seventh and by far the largest of Neptune's satellites. Triton was discovered by William Lassell in 1846 only a few weeks after the discovery of Neptune itself. In Greek mythology, Triton is a god of the sea, the son of Poseidon (Neptune); usually portrayed as having the head and trunk of a man and the tail of a fish.

Triton, Io and Venus are the only bodies in the solar system besides Earth that are known to be volcanically active at the present time (though Mars clearly was in the past). It's also interesting to note that very different volcanic processes occur in the outer solar system. Earth's and Venus' (and Mars') eruptions are of rocky material and are driven by internal heat. Io's eruptions are probably sulfur or sulfur compounds driven by tidal interactions with Jupiter. Triton's eruptions are of very volatile compounds like nitrogen or methane driven by seasonal heating from the Sun.