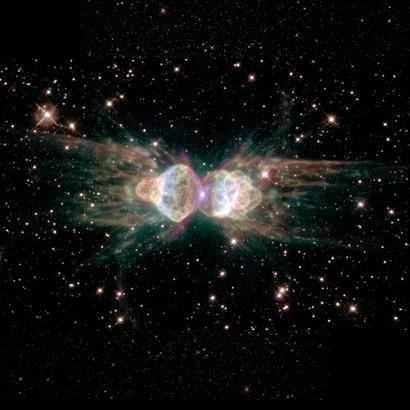 From ground-based telescopes, the Ant Nebula (Menzel 3, or Mz 3) resembles the head and thorax of a garden-variety ant. This dramatic NASA/ESA Hubble Space Telescope image, showing 10 times more detail, reveals the ant body as a pair of fiery lobes protruding from a dying, Sun-like star. Scientists would like to understand how a spherical star can produce such non-spherical symmetries in the gas that it ejects.

A second possibility is that, as the dying star spins, its strong magnetic fields are wound up into complex shapes like spaghetti in an eggbeater. Charged winds moving at speeds up to 1000 kilometers per second from the star, much like those in our Sun's solar wind but millions of times denser, are able to follow the twisted field lines on their way out into space.