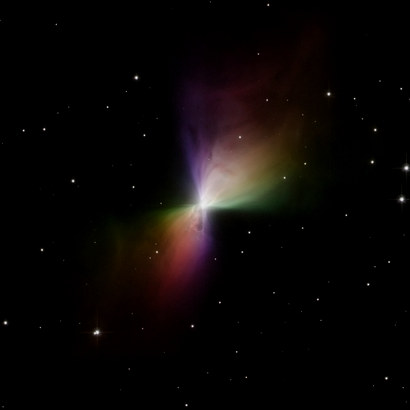 Boomerang Nebula : One of The Coldest Known Places in The Universe

The Boomerang Nebula is located about 5,000 light-years from Earth in the direction of the Southern constellation Centaurus. Submillimeter radio measurements made in 1995 show the deep interior of the nebula to have a temperature of only one degree Kelvin above absolute zero. This makes the inner regions of the Boomerang Nebula one of the coldest known places in the universe.

Over the last 1,500 years, nearly one and a half times the mass of our Sun has been lost by the central star of the Boomerang Nebula in an ejection process known as a bipolar outflow. The nebula's name is derived from its symmetric structure as seen from ground-based telescopes. Hubble's sharp view is able to resolve patterns and ripples in the nebula very close to the central star that are not visible from the ground.

Bipolar outflows are seen to occur both from very young stars (protostars) that are still in the process of collapsing and forming, and from old stars nearing the ends of their lives that have become bloated red giants. The Boomerang is believed to be the ejected outer layers from an old red giant. Each lobe of the Boomerang Nebula is nearly one light-year in length, making the total length of the nebula half as long as the distance from our Sun to our nearest neighbors- the Alpha Centauri stellar system, located roughly 4 light-years away.