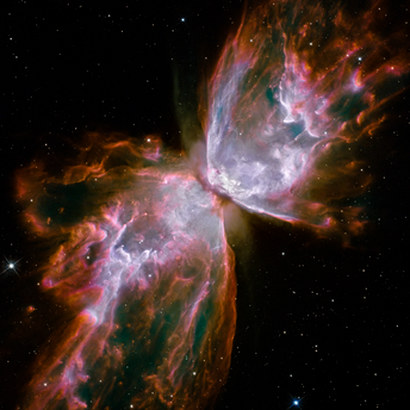 In 2009, the first snapshots were seen from the refurbished Hubble. Topping the list of exciting new views were colorful multi-wavelength pictures of far-flung galaxies, a densely packed star cluster, an eerie "pillar of creation," and this "butterfly" nebula, NGC 6302. A new spectrograph slices across billions of light-years to map the filamentary structure of the universe and trace the distribution of elements that are fundamental to life.

Now that Hubble has reopened for business, it will tackle a whole range of observations. Looking closer to Earth, such observations will include taking a census of the population of Kuiper Belt objects residing at the fringe of our solar system, witnessing the birth of planets around other stars, and probing the composition and structure of the atmospheres of other worlds.

Peering much farther away, astronomers have ambitious plans to use Hubble to make the deepest-ever portrait of the universe in near-infrared light. The resulting picture may reveal never-before-seen infant galaxies that existed when the universe was less than 500 million years old.