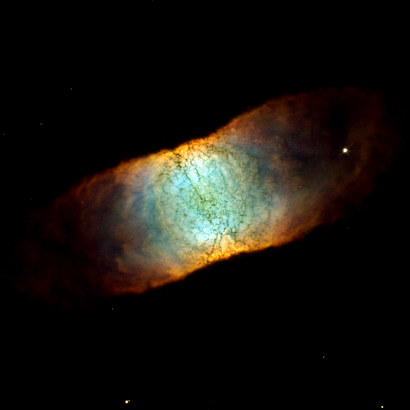 Like many other so-called planetary nebulae, the Retina Nebula (IC 4406) exhibits a high degree of symmetry. The left and right halves of the Hubble image are nearly mirror images of the other. One of the most interesting features of IC 4406 is the irregular lattice of dark lanes that criss-cross the center of the nebula. These lanes are about 160 astronomical units wide (1 AU is the distance between the Earth and Sun).

If we could fly around IC 4406 in a starship, we would see that the gas and dust form a vast donut of material streaming outward from the dying star. From Earth, we are viewing the donut from the side. This side view allows us to see the intricate tendrils of dust that have been compared to the eye's retina. In other planetary nebulae, like the Ring Nebula (NGC 6720), we view the donut from the top.

The donut of material confines the intense radiation coming from the remnant of the dying star. Gas on the inside of the donut is ionized by light from the central star and glows. Light from oxygen atoms is rendered blue in this image; hydrogen is shown as green, and nitrogen as red. The range of color in the final image shows the differences in concentration of these three gases in the nebula.