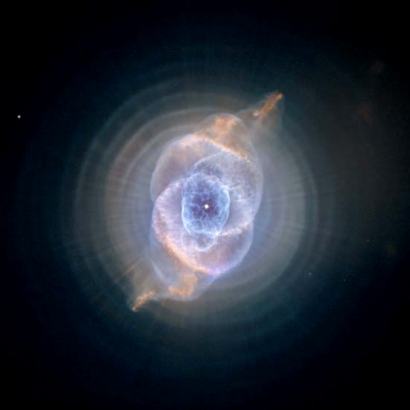 The Cat's Eye Nebula, NGC 6543, was one of the first planetary nebulae to be discovered. It is one of the most complex such nebulae seen in space. A planetary nebula forms when Sun-like stars gently eject their outer gaseous layers that form bright nebulae with amazing and confounding shapes.

As if the Cat's Eye itself isn't spectacular enough, this new image taken with Hubble's Advanced Camera for Surveys (ACS) reveals the full beauty of a bull's eye pattern of eleven or even more concentric rings, or shells, around the Cat's Eye. Each 'ring' is actually the edge of a spherical bubble seen projected onto the sky — that's why it appears bright along its outer edge.

Approximately 1,000 years ago the pattern of mass loss suddenly changed, and the Cat's Eye Nebula started forming inside the dusty shells. It has been expanding ever since, as discernible in comparing Hubble images taken in 1994, 1997, 2000, and 2002.