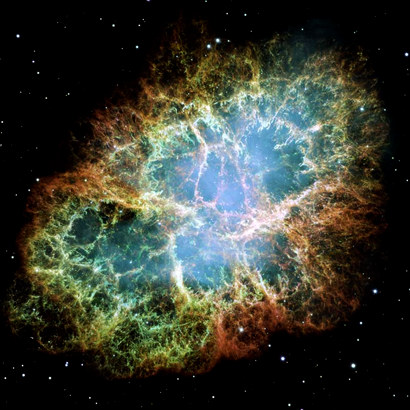 The Crab Nebula, M1, is a complex shell of expanding gas. The Crab Nebula formed from a star that was seen to explode in a supernova about 1000 years ago.

This is a mosaic image, one of the largest ever taken by NASA's Hubble Space Telescope of the Crab Nebula, a six-light-year-wide expanding remnant of a star's supernova explosion. Japanese and Chinese astronomers recorded this violent event in 1054, as did, almost certainly, Native Americans.

The orange filaments are the tattered remains of the star and consist mostly of hydrogen. The rapidly spinning neutron star embedded in the center of the nebula is the dynamo powering the nebula's eerie interior bluish glow. A neutron star is the crushed ultra-dense core of the exploded star.

The Crab Nebula derived its name from its appearance in a drawing made by Irish astronomer Lord Rosse in 1844, using a 36-inch telescope. When viewed by Hubble, as well as by large ground-based telescopes such as the European Southern Observatory's Very Large Telescope, the Crab Nebula takes on a more detailed appearance that yields clues into the spectacular demise of a star.