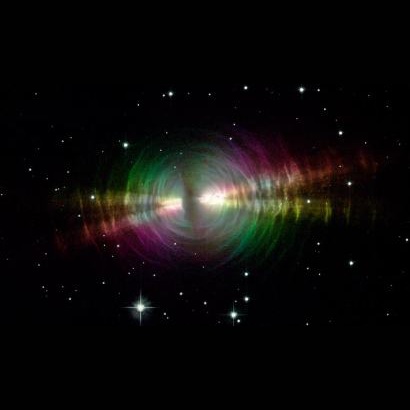 The Egg Nebula, CRL2688, offers astronomers a special look at the normally invisible dust shells swaddling an aging star. These dust layers, extending over one-tenth of a light-year from the star, have an onionskin structure that forms concentric rings around the star. A thicker dust belt, running almost vertically through the image, blocks off light from the central star. Twin beams of light radiate from the hidden star and illuminate the pitch-black dust, like a shining flashlight in a smoky room.

The artificial "Easter-Egg" colors in this image are used to dissect how the light reflects off the smoke-sized dust particles and then heads toward Earth.

By studying polarized light from the Egg Nebula, scientists can tell a lot about the physical properties of the material responsible for the scattering, as well as the precise location of the central (hidden) star. The fine dust is largely carbon, manufactured by nuclear fusion in the heart of the star and then ejected into space as the star sheds material. Such dust grains build dusty disks around future generations of young stars, and possibly in the formation of planets around those stars.