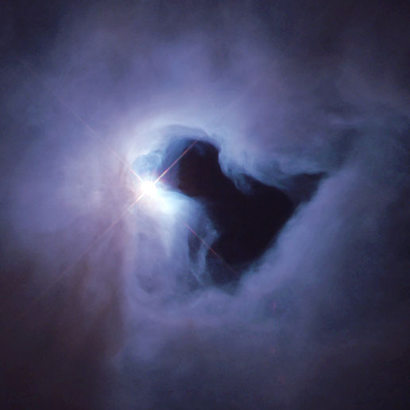 This reflection nebula, located in the Orion constellation, is lit up by a recently formed star. It is visible just left from the center. The star is titled V380 Orionis. The star shines white, because it has such a high surface temperature. Approximately 10,000 degrees celsius, which is almost twice the heat of the sun. The star is so young, that there is still material left over from when it was formed.

A reflection nebula doesn't emit light itself, it only shines from another source illuminates its dust. In this case, V380 Orionis. Located around the right side of the star is a Bok globule, or a remarkable, black cloud. The globule is an extremely dense cloud of cold gas, dust, and milecules. It is so dense, that is blocks out all of the light behind it. Astronomer think that new stars are possibly forming inside Bok globules.