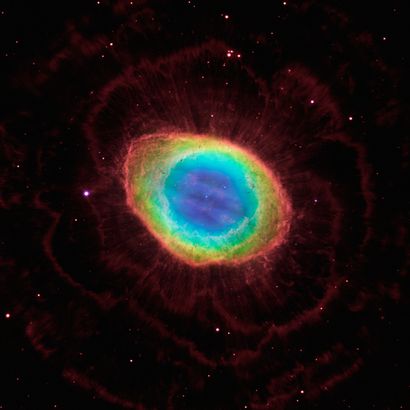 The Ring Nebula (M57, NGC 6720) is about 2,000 light-years away in the constellation Lyra. The nebula measures roughly one light-year across. In this composite image, the blue color represents helium, the green is oxygen, and the red is hydrogen.

Once a star consumes all of its hydrogen, the nuclear fuel that makes it shine, it expands to a red giant. The bloated star then expels its outer layers, exposing its hot core. Ultraviolet radiation from the core illuminates the discarded material, making it glow. The smoldering core, called a white dwarf, is the tiny white dot in the center of the Ring Nebula.