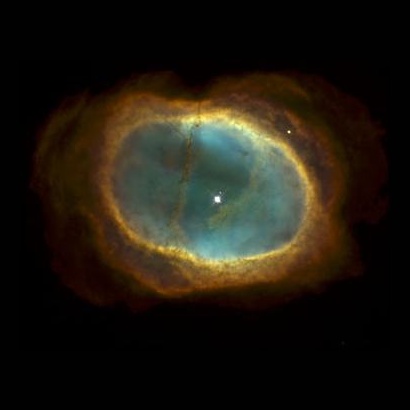 NGC 3132 is a striking example of a planetary nebula. This expanding cloud of gas surrounding a dying star is known to amateur astronomers in the Southern Hemisphere as the "Eight-Burst" or the "Southern Ring" Nebula.

The name Planetary Nebula refers only to the round shape that many of these objects show when examined through a small telescope. In reality, these nebulae have little or nothing to do with planets, but are instead huge shells of gas ejected by stars as they near the ends of their lifetimes. NGC 3132 is nearly half a light year in diameter, and at a distance of about 2,000 light-years is one of the nearest known planetary nebulae. The gases are expanding away from the central star at a speed of 9 miles per second.