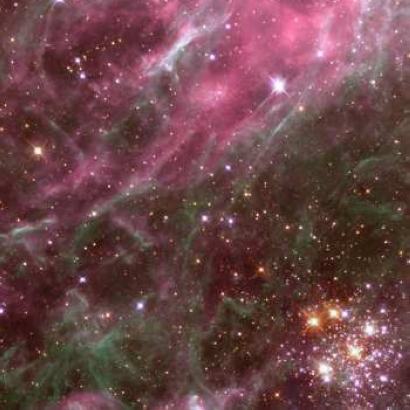 Tarantula Nebula, Hodge 301. In the most active starburst region in the local universe resides a cluster of brilliant, massive stars, known to astronomers as Hodge 301.

Hodge 301, seen in the lower right hand corner of this image, lives inside the Tarantula Nebula, which resides in our galactic neighbor, the Large Magellanic Cloud. Many of the stars in Hodge 301 are so old that they have exploded as supernovae.

These exploded stars are blasting material into the surrounding region at speeds of almost 200 miles per second. The high-speed matter is plowing into the surrounding Tarantula Nebula, shocking and compressing the gas into a multitude of sheets and filaments, seen in the upper left portion of the picture.