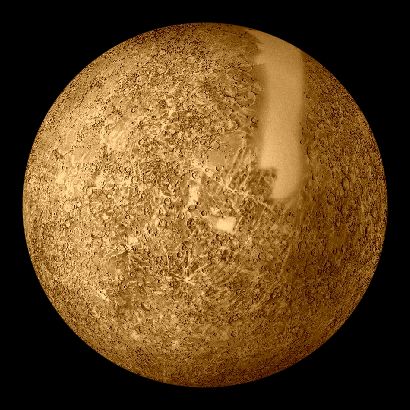 Mercury's orbit is highly eccentric; at perihelion it is only 46 million km from the Sun but at aphelion it is 70 million. The position of the perihelion precesses around the Sun at a very slow rate. 19th century astronomers made very careful observations of Mercury's orbital parameters but could not adequately explain them.

The reason for the tiny differences between the observed and predicted values was unknown for many decades. It was thought that another planet (sometimes called Vulcan) slightly closer to the Sun than Mercury might account for the discrepancy. But despite much effort, no such planet was found. The real answer turned out to be much more dramatic: Einstein's General Theory of Relativity! Its correct prediction of the motions of Mercury was an important factor in the early acceptance of the theory.

Until 1962 it was thought that Mercury's day was the same length as its year so as to keep that same face to the Sun much as the Moon does to the Earth. But this was shown to be false in 1965 by doppler radar observations. It is now known that Mercury rotates three times in two of its years.

Mercury has been visited by only one spacecraft, Mariner 10. It flew by three times in 1974 and 1975. A new discovery-class mission to Mercury, MESSENGER was launched by NASA in 2004 and will orbit Mercury starting in 2011 after several flybys.