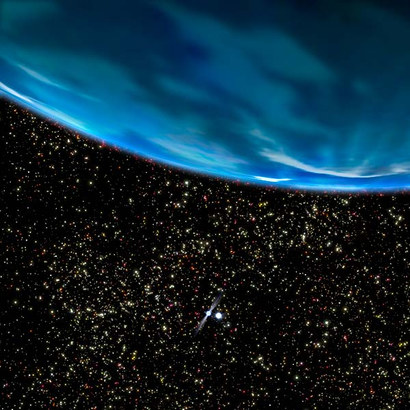 NASA's Hubble Space Telescope precisely measured the mass of the oldest known planet in our Milky Way galaxy, located in globular star cluster M4. At an estimated age of 13 billion years, the planet is more than twice as old as Earth's 4.5 billion years. It's about as old as a planet can be. It formed around a young, sun-like star barely 1 billion years after our universe's birth in the Big Bang.

The ancient planet has had a remarkable history because it resides in an unlikely, rough neighborhood. It orbits a peculiar pair of burned-out stars in the crowded core of a cluster of more than 100,000 stars. The new Hubble findings close a decade of speculation and debate about the identity of this ancient world. Until Hubble's measurement, astronomers had debated the identity of this object.

Was it a planet or a brown dwarf? Hubble's analysis shows that the object is 2.5 times the mass of Jupiter, confirming that it is a planet. Its very existence provides tantalizing evidence that the first planets formed rapidly, within a billion years of the Big Bang, leading astronomers to conclude that planets may be very abundant in our galaxy.