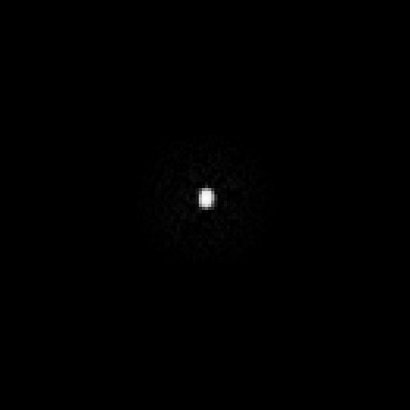 Quaoar is a dwarf planet that lies a billion kilometers beyond Pluto and moves around the Sun every 288 years in a near-perfect circle. Until recently it was just a curious point of light. This image is the sum of 16 Hubble exposures registered on Quaoar.

NASA's Hubble Space Telescope has measured Quaoar and found it to be 1300 km wide. That's about 400 km wider than the biggest main-belt asteroid (Ceres) and more than half the diameter of Pluto itself. Indeed, it's the largest object in the solar system seen since the discovery of Pluto 72 years ago.

Michael Brown and Chadwick Trujillo of the California Institute of Technology, Pasadena, Calif. used the Palomar 48-inch telescope to discover Quaoar creeping across the summer constellation Ophiuchus. Brown followed-up their discovery using the Hubble Space Telescope. Only Hubble has the sharpness needed to actually resolve the disk of such a distant world.