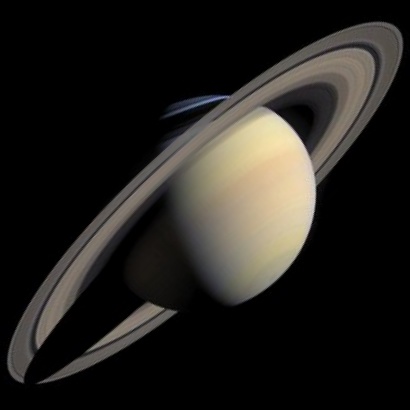 While cruising around Saturn in early October 2004, Cassini captured a series of images that have been composed into the largest, most detailed, global natural color view of Saturn and its rings ever made. This grand mosaic consists of 126 images acquired in a tile-like fashion, covering one end of Saturn's rings to the other and the entire planet in between. The images were taken over the course of two hours on Oct. 6, 2004, while Cassini was approximately 6.3 million kilometers (3.9 million miles) from Saturn. Since the view seen by Cassini during this time changed very little, no re-projection or alteration of any of the images was necessary.

Many of Saturn's splendid features noted previously in single frames taken by Cassini are visible in this one detailed, all-encompassing view: subtle color variations across the rings, the thread-like F ring, ring shadows cast against the blue northern hemisphere, the planet's shadow making its way across the rings to the left, and blue-grey storms in Saturn's southern hemisphere to the right.