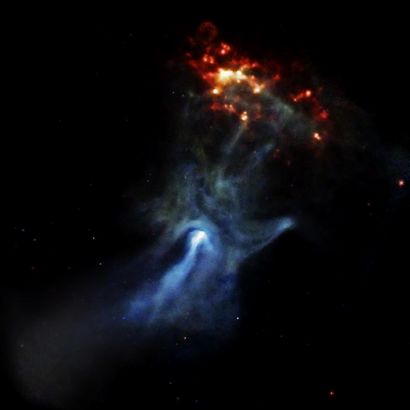 The pulsar PSR B1509-58 is a rapidly spinning neutron star spewing energy out into the space around it to create complex and intriguing structures, including one that looks like a large cosmic hand. PSR B1509-58 is a small, dense object only 12 miles in diameter and in the center of a beautiful X-ray nebula that spans 150 light years.

PSR B1509-58 is spinning completely around almost 7 times every second and is releasing energy into its environment at a prodigious rate -- presumably because it has an intense magnetic field at its surface, estimated to be 15 trillion times stronger than the Earth's magnetic field.