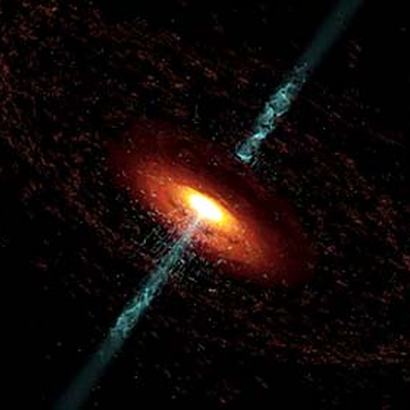 Quasar 3C120. Probably the best image to date of a paired jet associated with a supermassive Black Hole is that recently captured by HST as it trained on Quasar 3C120. The jet, composed of x-rays and electrons, follows strong magnetic lines. These jets may be the same phenomena commonly detected by radio astronomy.

Galaxies are thought to have multiple Black Holes, most of which are relatively small. Evidence is growing that most spiral galaxies, at least, have one or more Black Holes in their central regions. Such Black Holes seem to serve as a stabilizing influence on the evolution of a galaxy, causing stars and stellar gas and dust to migrate inward and be dragged into the Black Hole.