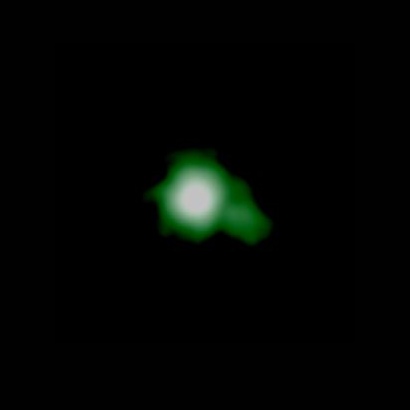 The most distant jet ever observed was discovered in an image of a quasar made by NASA's Chandra X-ray Observatory. Extending more than 100,000 light-years from the supermassive black hole powering the quasar, the jet of high-energy particles provides astronomers with information about the intensity of the cosmic microwave background radiation 12 billion years ago. The discovery of this jet was a surprise to the astronomers. There had been no indication in previous images of any complex structure or a jet.

Quasars are thought to be galaxies that harbor an active central supermassive black hole fueled by infalling gas and stars. This accretion process is often observed to be accompanied by the generation of powerful high-energy jets. As the electrons in the jet fly away from the quasar at near the speed of light, they move through the sea of cosmic background radiation left over from the hot early phase of the universe.

Significant energy is being deposited in the outer regions of the host galaxy at a very early stage. This energy input could have a profound effect on the evolution of the galaxy by triggering the formation of stars, or inhibiting the growth of the galaxy through accretion of matter from intergalactic space.