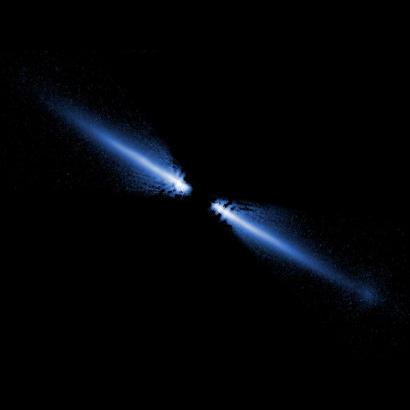 A visible-light image of a debris disk around the red dwarf star AU Microscopii. Planets may be forming, or might already exist, within it. The disk glows in starlight reflected by tiny grains of dust created by the collisions of asteroids and comets. Because it is composed of the pulverized remnants of these objects, it is called a "debris disk."

More than 40 billion miles across, it appears like a spindle of light because we view it nearly edge on (like looking at a dinner plate along its side). The star is about 12 million years old and is only 32 light-years from Earth.

This makes its disk the closest yet seen in reflected starlight. It is also the first disk imaged around an M-type red dwarf, the most common type of star in the stellar neighborhood around the Sun.