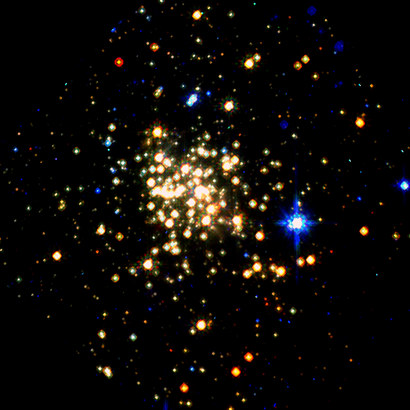 Arches Cluster : The Densest Known Cluster of Stars In Our Galaxy

Studying the densest known cluster of stars in our galaxy, the Arches cluster, astronomers determined that stars are not created any larger than about 150 times the mass of our Sun, or 150 solar masses.

The finding takes astronomers closer to understanding the complex star-formation process and gives the strongest footing yet to the idea that stars have a weight limit. Knowing how large a star can form may offer important clues to how the universe makes stars. Massive stars manufacture many of the heavier elements in the cosmos, which are the building blocks for new stars and planets.

"This is an incredible cluster that contains a rich collection of some of the most massive stars in the galaxy, yet it appears to be missing stars more massive than 150 times the mass of our Sun," said astronomer Donald F. Figer of the Space Telescope Science Institute in Baltimore, Md. "Theories predict that the more massive the cluster, the more massive the stars within it. We looked at one of the most massive clusters in our galaxy and found that there is a sharp cutoff to how large a star can form."