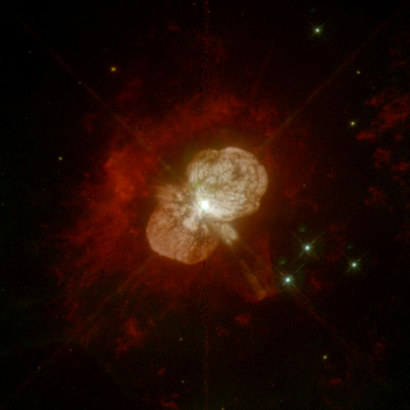 Eta Carinae : A Star On the Brink of Destruction

Eta Carinae has a mass of approximately 150 times that of the sun, and is about 4 million times brighter than our local star, making it one of the most massive and most luminous stars known.

Eta Carinae is highly unstable, and prone to violent outbursts. The last of these occurred in 1841, when despite it's distance (over 10,000 light years away) Eta Carinae briefly became the second brightest star in the sky.

The picture is a combination of three different images taken in red, green, and blue light. The ghostly red outer glow surrounding the star is composed of the very fastest moving of the material which was ejected during the last century's outburst. This material, much of which is moving more than two million miles per hour, is largely composed of nitrogen and other elements formed in the interior of the massive stir, and subsequently ejected into interstellar space.