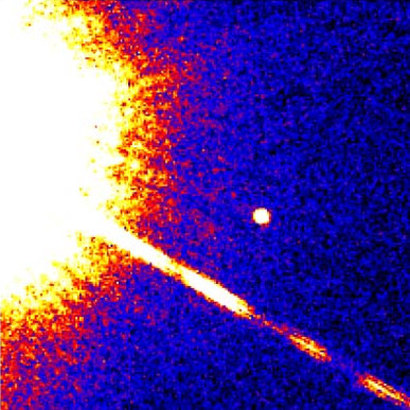 The brown dwarf, called Gliese 229B (GL229B), is a small companion to the cool red star Gliese 229, located 19 light-years from Earth in the constellation Lepus. Estimated to be 20 to 50 times the mass of Jupiter, GL229B is too massive and hot to be classified as a planet as we know it, but too small and cool to shine like a star. At least 100,000 times dimmer than Earth's Sun, the brown dwarf is the faintest object ever seen orbiting another star.

"This is the first time we have ever observed an object beyond our solar system which possesses a spectrum that is astonishingly just like that of a gas giant planet," said Shrinivas Kulkarni, a member of the team from Caltech.

Kulkarni added, however, that "it looks like Jupiter, but that's what you'd expect for a brown dwarf." The infrared spectroscopic observations of GL229B, made with the 200-inch Hale telescope at Palomar, show that the dwarf has the spectral fingerprint of the planet Jupiter -- an abundance of methane. Methane is not seen in ordinary stars, but it is present in Jupiter and other giant gaseous planets in our solar system.

Brown dwarfs are a mysterious class of long-sought object that forms the same way stars do, that is, by condensing out of a cloud of hydrogen gas. However, they do not accumulate enough mass to generate the high temperatures needed to sustain nuclear fusion at their core, which is the mechanism that makes stars shine.