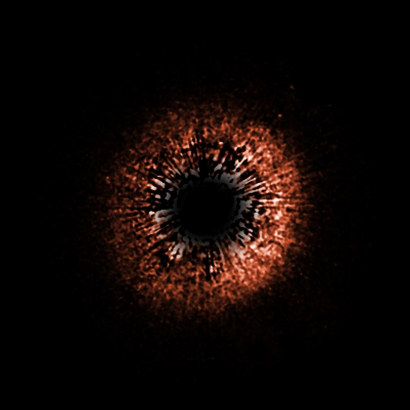 This is a false-color view of a planetary debris disk encircling the star HD 107146, a yellow dwarf star very similar to our Sun, though it is much younger (between 30 and 250 million years old, compared to the almost 5 billion years age of the Sun). The star is 88 light-years away from Earth. This is the only disk to have been imaged around a star so much like our own.

The slight difference in brightness on one side of the disk is due to the fact that small dust particles scatter more light when they are between Earth and the star, rather than behind the star. This suggests that the bright side is closer to us. The disk is redder than the star whose light it reflects, indicating that it contains grains one two-thousandth of a millimeter in size (about 100 times smaller than household dust).

Our Sun is believed to have a ring of dust around it, lying just beyond the orbit of Neptune, although it is ten times narrower than the one around HD 107146. Our solar system also has between 1,000 and 10,000 times less dust. The size of the ring, its the thickness, and the amount of dust make it unlikely that HD 107146 will ever evolve into a system like our own.