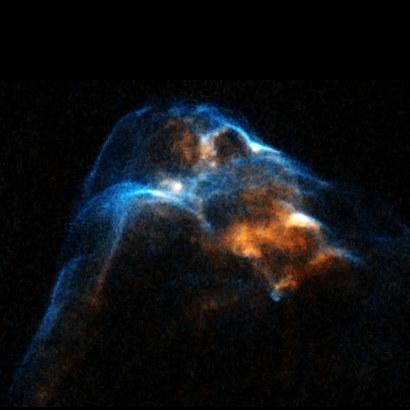 HH 34 resides near the Orion Nebula, in the northern sky roughly 1,350 light-years from Earth. New stars fire off energetic jets of glowing gas traveling at supersonic speeds in opposite directions through space.

Jets are an active, short-lived phase of star formation, lasting only about 100,000 years. They are called Herbig-Haro (HH) objects, named in honor of George Herbig and Guillermo Haro, who studied the outflows in the 1950s. Astronomers don't know what role jets play in the star-formation process or exactly how the star unleashes them.

A star forms from a collapsing cloud of cold hydrogen gas. As the star grows, it gravitationally attracts more matter, creating a large spinning disk of gas and dust around it. Eventually, planets may arise within the disk as dust clumps together.

The disk material gradually spirals onto the star and escapes as high-velocity jets along the star's spin axis. The speedy jets may initially be confined to narrow beams by the star's powerful magnetic field. The jet phase stops when the disk runs out of material, usually a few million years after the star's birth.