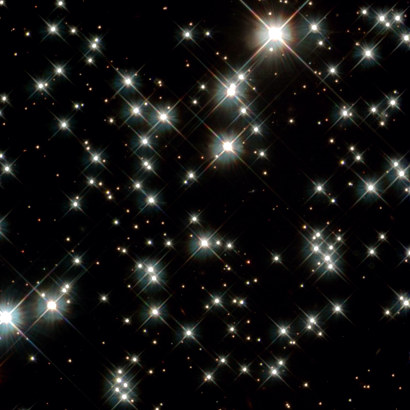 The ancient white dwarf stars, as seen by Hubble, turn out to be 12 to 13 billion years old. Because earlier Hubble observations show that the first stars formed less than 1 billion years after the universe's birth in the big bang, finding the oldest stars puts astronomers well within arm's reach of calculating the absolute age of the universe.

Hot, dense spheres of carbon left behind by the long-dead star's nuclear furnace, white dwarfs cool down at a predictable rate — the older the dwarf, the cooler it is, making it a perfect "clock", ticking for almost as long as the universe has existed.

This approach has been recognized as more reliable than age-dating the oldest stars still burning by nuclear fusion, which relies on complex models and calculations about how a star burns its nuclear fuel and ages. White dwarfs are easier to age-date because they are simply cooling, but the trick has always been finding the dimmest and therefore the longest-running "clocks."

As white dwarfs cool they grow fainter, and this required that Hubble take many snapshots of the ancient globular star cluster M4. These stars are so feeble (at 30th magnitude – which is considerably fainter than originally anticipated for any Hubble telescope imaging with the original cameras), they are less than one-billionth the apparent brightness of the faintest stars that can be seen by the naked eye.