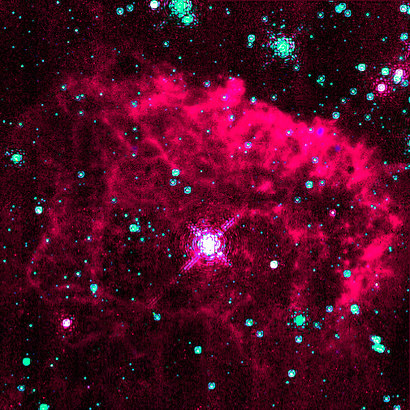 One of the intrinsically brightest stars in our galaxy appears as the bright white dot in the center of this image taken with NASA's Hubble Space Telescope. Hubble's Near Infrared Camera and Multi-Object Spectrometer (NICMOS) was needed to take the picture, because the star is hidden at the galactic center, behind obscuring dust. NICMOS' infrared vision penetrated the dust to reveal the star, which is glowing with the radiance of 10 million suns.

The image also shows one of the most massive stellar eruptions ever seen in space. The radiant star has enough raw power to blow off two expanding shells (magenta) of gas equal to the mass of several of our suns. The largest shell is so big (4 light-years) it would stretch nearly all the way from our Sun to the next nearest star. The outbursts seen by Hubble are estimated to be only 4,000 and 6,000 years old.

Despite such a tremendous mass loss, astronomers estimate the extraordinary star may presently be 100 times more massive than our Sun, and may have started with as much as 200 solar masses of material, but it is violently shedding much of its mass. The star is 25,000 light-years away in the direction of the constellation Sagittarius.