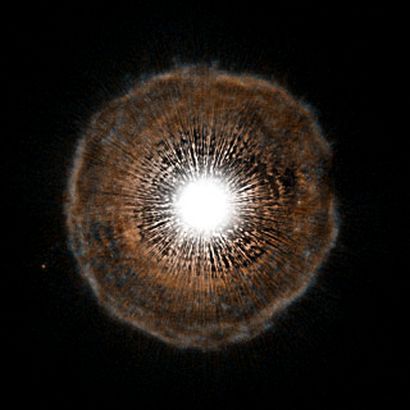 U Camelopardalis : A Red Giant Blowing a Bubble

U Camelopardalis, or U Cam for short, is a star nearing the end of its life. As it begins to run low on fuel, it is becoming unstable. Every few thousand years, it coughs out a nearly spherical shell of gas as a layer of helium around its core begins to fuse. The gas ejected in the star’s latest eruption is clearly visible in this picture as a faint bubble of gas surrounding the star.

U Cam is an example of a carbon star. This is a rare type of star whose atmosphere contains more carbon than oxygen. Due to its low surface gravity, typically as much as half of the total mass of a carbon star may be lost by way of powerful stellar winds.