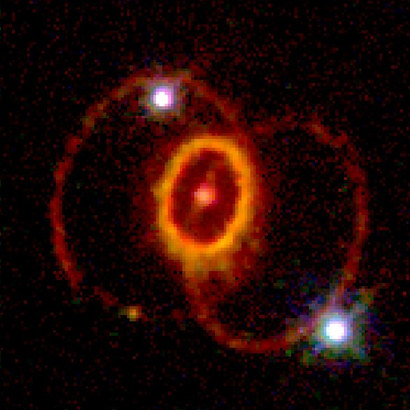 Recent optical observations of SN 1987A with the Hubble Space Telescope have revealed gradually brightening hot spots from a ring of matter that was ejected by the star thousands of years before it exploded. Chandra's X-ray image shows the cause for this brightening ring. A shock wave, traveling at a speed of 4,500 kilometers per second (10 million miles per hour), is smashing into portions of the optical ring. The gas in the expanding shell has a temperature of about 10 million degrees Celsius, and is visible only with an X-ray telescope.

SN 1987A is in the Large Magellanic Cloud, a nearby galaxy that is 160,000 light years from Earth. Although SN 1987A was a spectacularly violent event, we are watching it from a very safe distance. For a supernova to do real damage to us, it would have to occur at a distance of less than about a hundred light years, more than a thousand times closer than SN1987A.