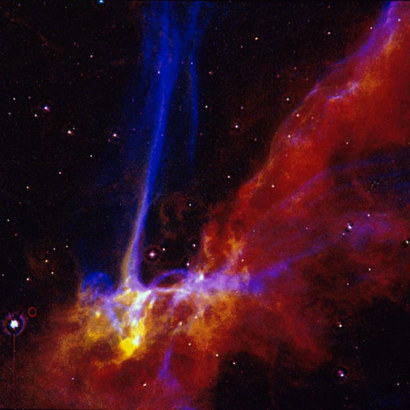 Light from this exploding star reached Earth 320 years ago, nearly a century before our United States celebrated its birth with a bang. The dead star's shredded remains are called Cassiopeia A, or "Cas A" for short. Cas A is the youngest known supernova remnant in our Milky Way Galaxy and resides 10,000 light-years away in the constellation Cassiopeia, so the star actually blew up 10,000 years before the light reached Earth in the late 1600s.

This stunning Hubble image of Cas A is allowing astronomers to study the supernova's remains with great clarity, showing for the first time that the debris is arranged into thousands of small, cooling knots of gas. This material eventually will be recycled into building new generations of stars and planets. Our own Sun and planets are constructed from the debris of supernovae that exploded billions of years ago.

This photo shows the upper rim of the supernova remnant's expanding shell. Near the top of the image are dozens of tiny clumps of matter. Each small clump, originally just a small fragment of the star, is tens of times larger than the diameter of our solar system. The colors highlight parts of the debris where chemical elements are glowing. The dark blue fragments, for example, are richest in oxygen; the red material is rich in sulfur.