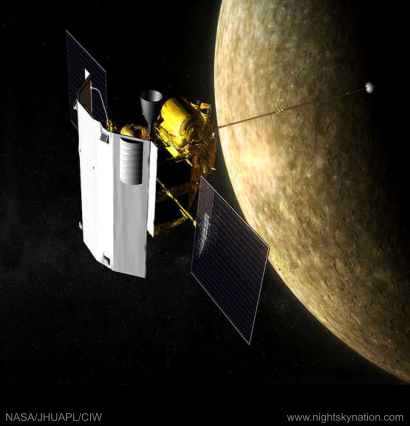 MESSENGER is an acronymn for MErcury Surface, Space ENvironment, GEochemistry, and Ranging. MESSENGER has provided the first return of new spacecraft data from Mercury since the Mariner 10 mission more than 30 years ago.

The MESSENGER probe was launched on August 3, 2004 at 06:15:56 UTC by NASA from Cape Canaveral in Florida, aboard a Delta II launch vehicle. The complete burn sequence lasted 57 minutes, sending the probe into a 7.9 billion-kilometer trajectory that took 6 years, 7 months and 16 days before its orbital insertion on March 18, 2011.

Inserting a spacecraft into orbit around Mercury is difficult, because a probe approaching on a direct path from Earth would be accelerated by the Sun's gravity and pass Mercury far too quickly to orbit it. However, using a trajectory designed by Chen-wan Yen in 1985, it was possible to use multiple, consecutive gravity assist, 'swingby' maneuvers around Venus and Mercury, in combination with minor propulsive trajectory corrections, to slow the spacecraft gradually, using much less propellant.

MESSENGER used the last of its maneuvering propellant and began to suffer orbital decay in early 2015, having taken thousands of photos, some proving the existance of water ice and organic compounds on Mercury. The mission ended on April 30, 2015, when the probe impacted onto the surface of Mercury.