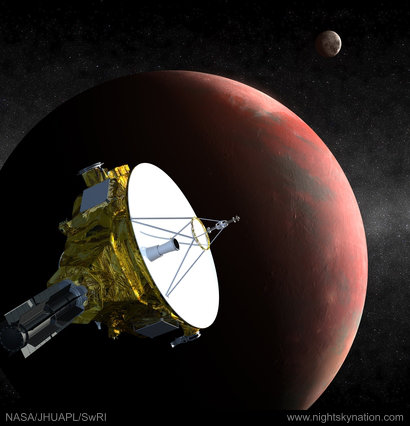 The New Horizons spacecraft is roughly 8 feet across and weighed approximately 1,050 pounds when first fueled. It's about the size and shape of a baby grand piano. Launched on Jan 19, 2006 at 2:00.00 pm EST from the Cape Canaveral Air Force Station in Florida using the Lockheed Martin Atlas V launch vehicle. It has taken more than 9 years to travel the 3 billion miles to Pluto, at 27,000 miles per hour.

New Horizons also contains the Long Range Reconnaissance Imager. LORRI is an optical telescope that should provide the highest resolution imaging of the surface.

New Horizons came out of hibernation for the last time on Dec 6, 2014. Earth is well under way to prepare the spacecraft for a six-month encounter with Pluto that begins in January, 2015. After the Pluto fly-by New Horizons will continue even further to explore the Kuiper Belt.