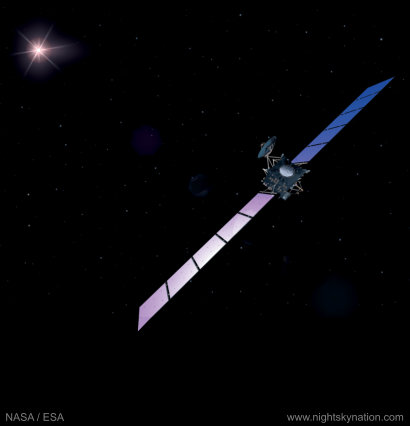 The Rosetta mission is a ten-year journey to visit Comet 67P/Churyumov-Gerasimenko, where it will make the most detailed study of a comet ever attempted. It will follow the comet through the inner Solar System, measuring the increase in activity as the icy surface is warmed up by the Sun. The lander will focus on the composition and structure of the comet nucleus material. It will also drill more than 20cm into the subsurface to collect samples for inspection by the lander's onboard laboratory.

Rosetta launched on 2 March 2004 by an Ariane-5 G+ from Europe’s spaceport in Kourou, French Guiana. On the way to Comet 67p Rosetta also passed by and imaged two asteroids: 2867 Steins on 5 September 2008 and 21 Lutetia on 10 July 2010. On 12 November 2014, Rosetta successfully soft-landed its Philae probe on a comet, the first time in history that such an extraordinary feat has been achieved.