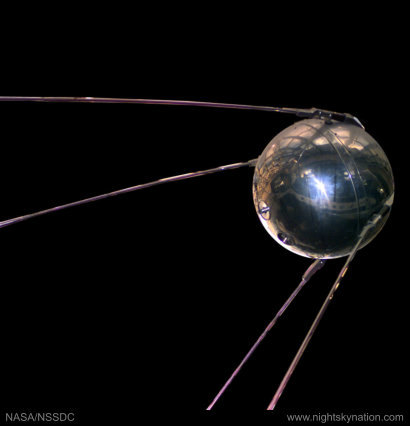 In a race to beat the Unites States to become the first nation to launch a man-made spacecraft, the Soviet Union decided to simplify their plans. 'Object PS' weighed around 200 pounds compared to the 'Object D' 3000 pounds. It carried a simple radio transmitter instead of the complex scientific instruments planned for Object D, and it could be launched using the existing R-7 rocket.

The R-7 lauch rocket was named Sputnik, and the spacecraft was called Sputnik 1. Sputnik was launched on 4 October 1957 at 19:28:34 UTC, actually 5 October at the launch site at Baikonur Cosmodrome in Kazakhstan. 19.9 seconds after engine cut-off, PS-1 separated from the second stage and the satellite's transmitter was activated.

295.4 seconds into the flight the world's first spacecraft had attained an altitude of 139 mi above sea level with a velocity of 3,474 miles per hour. Sputnik 1 orbited until 4 January 1958, having completed 1,440 orbits of the Earth.

The word 'sputnik' means 'traveling companion' in Russian, and is now commonly used to also mean 'satellite.' This image is a photo taken of replica of Sputnik 1 at the National Air and Space Museum of the Smithsonian Institution located in Washington, D.C.