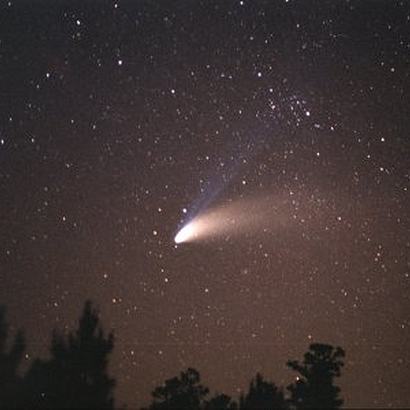 Comets are more complex than just "dirty iceballs", whizzing through our solar system from somewhere deep in space, to hook a sharp turn around our Sun and go back where they came from. Comets are the original "stealth" object. They can absorb almost all the radiation they encounter. An asphalt pavement reflects 7 times more light than the nucleus of some comets.

Comets are best known for their tails. In fact that is how they got their name, which means "hairy star". Comet tails are made of dust and electrically charged gasses called ions. The tail made of dust is left behind in the comet's orbit in such a manner that it often forms a curved tail. At the same time, the ion gas tail is more strongly affected by the solar wind than dust is, so this tail always points away from the sun.

Hundreds of tiny comets pass through the inner solar system every year. If a comet becomes bright enough to be seen without a telescope it is usually called a Great Comet. In the past, when a bright comet was seen in the night sky, people thought bad things were going to happen. Now people just think "what a pretty comet!"