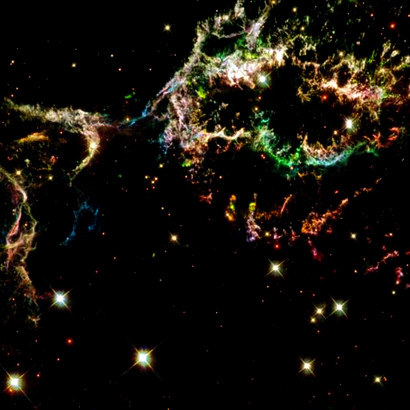 This is an image of a small portion of the Cygnus Loop supernova remnant, taken with the Wide Field and Planetary Camera on NASA's Hubble Space Telescope on April 24, 1991. Supernova remnants contribute by enriching space with heavy elements, and triggering new star formation by compressing interstellar gas.

The Cygnus Loop marks the edge of a bubble-like, expanding blast wave from a colossal stellar explosion which occurred about 15,000 years ago. The supernova blast wave is slamming into tenuous clouds of interstellar gas. This collision heats and compresses the gas, causing it to glow. The shock acts as a searchlight by revealing the structure of the interstellar medium.

A bluish ribbon of light stretching left to right across the picture might be a knot of gas ejected by the supernoya. This interstellar "bullet," traveling over three million miles per hour, is just catching up with the shock front, which has been slowed by plowing into interstellar material.