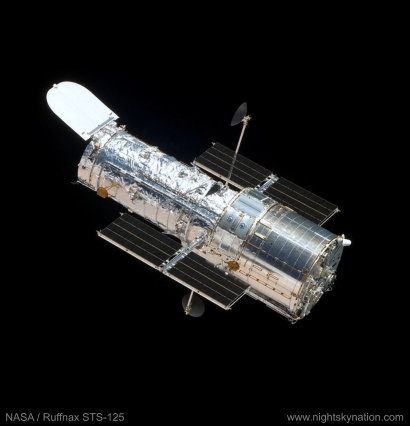 Hubble : Looking Into The Distance

The Hubble Space Telescope (HST) is a space telescope that was launched into low Earth orbit in 1990 and remains in operation. With a 2.4-meter (7.9 ft) mirror, Hubble's four main instruments observe in the near ultraviolet, visible, and near infrared spectra. The telescope is named after the astronomer Edwin Hubble.

Hubble's orbit outside the distortion of Earth's atmosphere allows it to take extremely high-resolution images with almost no background light. Hubble has recorded some of the most detailed visible-light images ever, allowing a deep view into space and time. Many Hubble observations have led to breakthroughs in astrophysics, such as accurately determining the rate of expansion of the universe.

The Hubble Telescope celebrated its 20th anniversary in space on April 24, 2010. To commemorate the occasion, NASA, ESA, and Space Telescope Institute (STScI) released an image from the Carina Nebula. Hubble's scientific successor, the James Webb Space Telescope (JWST), is scheduled for launch in 2018.