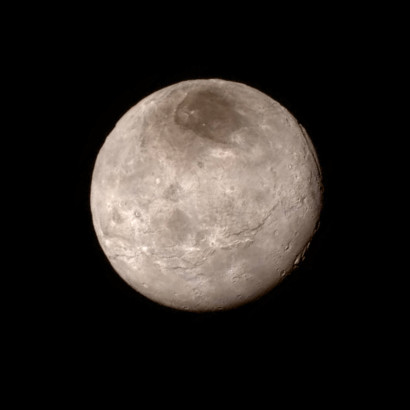 Charon is named for the mythological figure who ferried the dead across the River Acheron into Hades (the underworld). Charon was discovered in 1978 by Jim Christy. Prior to that it was thought that Pluto was much larger since the images of Charon and Pluto were blurred together.

Charon is unusual in that it is the largest moon with respect to its primary planet in the Solar System. Some prefer to think of Pluto-Charon as a double planet rather than a planet and a moon. Pluto and Charon are also unique in that not only does Charon rotate synchronously but Pluto does, too: they both keep the same face toward one another.

Remarkable new details of Charon are revealed in this image from New Horizons Long Range Reconnaissance Imager (LORRI), taken late on July 13, 2015 from a distance of 289,000 miles. New Horizons traveled more than three billion miles over nine-and-a-half years to reach the Pluto system.

Mission scientists are surprised by the apparent lack of craters on Charon. South of the moon's equator, at the bottom of this image, terrain is lit by the slanting rays of the sun, creating shadows that make it easier to distinguish topography. Even here, however, relatively few craters are visible, indicating a relatively young surface that has been reshaped by geologic activity.