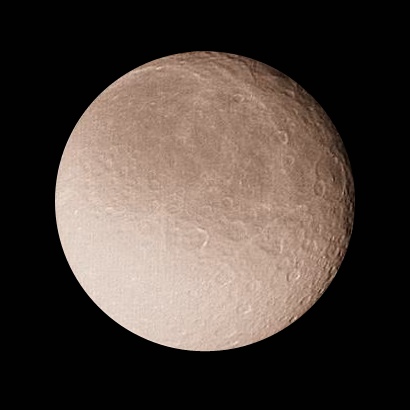 Rhea. Saturn Moons. Rhea is the fourteenth of Saturn's known satellites and the second largest. In Greek mythology Rhea was the sister and wife of Cronus (Saturn) and the mother of Demeter, Hades (Pluto), Hera, Hestia, Poseidon (Neptune), and Zeus (Jupiter).

Rhea was discovered by Cassini in 1672. Though somewhat larger, Rhea is otherwise very similar to Dione. They both have similar compositions, albedo features and varied terrain. Both rotate synchronously and have dissimilar leading and trailing hemispheres.

Rhea is composed primarily of water ice with rock making up less than 1/3 of its mass. The leading hemisphere is heavily cratered and uniformly bright. Like Callisto, the craters lack the high relief features seen on the Moon and Mercury. On the trailing hemisphere there is a network of bright swaths on a dark background and few visible craters.