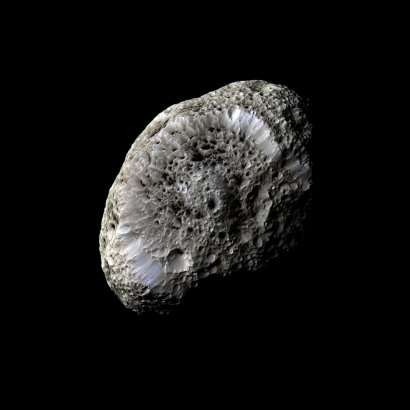 The potato-shaped Saturn moon Hyperion is the largest known irregular (nonspherical) body in the Solar System. Hyperion's average diameter is 270 kilometers (168 miles). Considering its odd shape, Hyperion is probably a remnant of a larger moon that was destroyed by a major impact.

Hyperion appeared as a tiny dot to astronomers until the Voyager II spacecraft passed through the Saturnian system in 1981 but this view was from a distance. The Voyager images showed the irregular shape, the heavy cratoring, and the chaotic spin. However, Cassini has filled in details including the curious sponge-like appearance and the presence of complexed compounds.