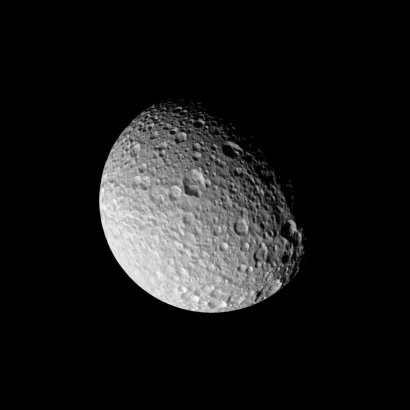 Mimas and another Saturn moon, Rhea, have been called "the most heavily cratered body in the Solar System." Mimas would probably have been more heavily cratered except, being closer to Saturn, Mimas was warmer (and consequently softer) for a longer time so early features have faded away.

Mimas is in resonance with two nearby moons, Dione and Enceladus. That is, these moons speed up slightly as they approach each other and slow down as they draw away, causing their orbits to vary slightly in a long series of complex changes, which help keep them locked in their positions.