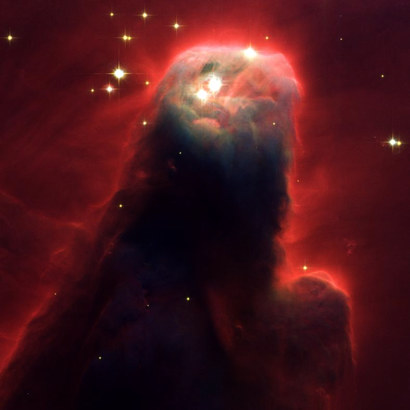 Resembling a nightmarish beast rearing its head from a crimson sea, this monstrous object is actually an innocuous pillar of gas and dust. NGC 2264 is called the Cone Nebula because in ground-based images, it has a conical shape.

Radiation from hot, young nearby stars has slowly eroded the nebula over millions of years. Ultraviolet light heats the edges of the dark cloud, releasing gas into the relatively empty region of surrounding space. There, additional ultraviolet radiation causes the hydrogen gas to glow, which produces the red halo of light seen around the pillar. Monstrous pillars of cold gas are common in large regions of star birth.

A similar process occurs on a much smaller scale to gas surrounding a single star, forming the bow-shaped arc seen near the upper left side of the Cone. This arc, seen previously with the Hubble telescope, is 65 times larger than the diameter of our solar system. The blue-white light from surrounding stars is reflected by dust.