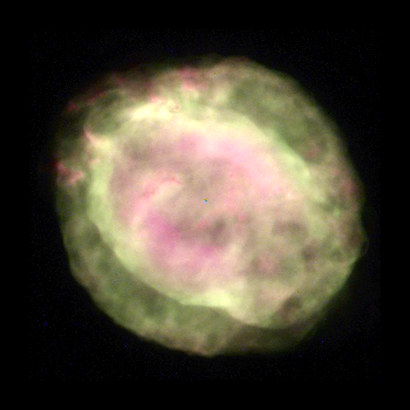 NGC 6818 is in the constellation Sagittarius at a distance of about 6000 light-years. It has a diameter of about 0.5 light-year. The Hubble telescope observation was taken March 10, 1997 by the Wide Field and Planetary Camera 2.

This is a composite of images taken in 3 filters: Halpha is red, Hbeta is blue, and O III (doubly ionized oxygen) 5007 is green. As a result of the longer exposure time at Hbeta, the central star of the planetary nebula appears blue.

We see a roughly spherical outer envelope as well as a brighter vase-shaped interior "bubble". Astronomers believe that a fast wind from the hot central star is creating the elongated shape and in fact has caused a "blowout" at the two ends of the major axis, at the lower right and upper left.